Moments are fleeting, and if we don’t stop to find the good, the beauty, the innocent, the wonder….we may just believe all the ugliness that bombards us everyday. So stop. Take a moment to find something pure and wonderful. Maybe … Continue reading →

Everyday, you’re there, but I don’t always see. Moments pass into weeks, and all I think of, is me. You give and give, while I take and take. I use it all up, like there’s nothing at stake. Yet, still … Continue reading → 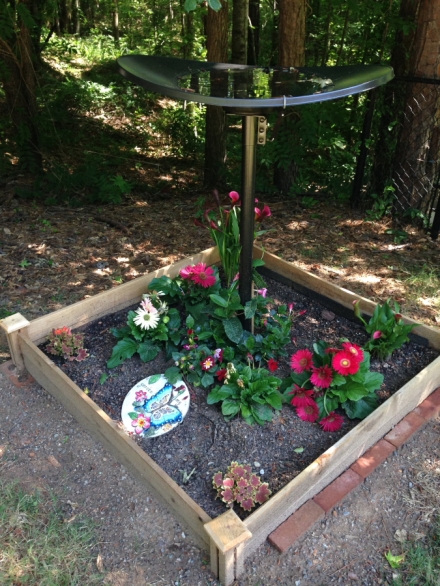 When I bought my house, there was a Direct TV satellite system there. I HATE Direct TV with a passion and I barely watch television. So needless to say, that eyesore had to go.

The reason I hate to Direct TV is that they were the most utterly rude and unprofessional company I have ever experienced, but that’s really not the point of the story. However, considering I recycled their abandoned property into something for birds to crap on, is really just poetic.

Instead of tearing this eyesore of a pole out of the ground, my boyfriend and I decided to create some beauty -a flower bed and birdbath (which I mentioned back in June when I did a garden update post).

The first step was to disassemble the dish from the pole.

The dish before tweaking.

Both items needed to be painted black. But the dish itself required some tweaking. My dad and boyfriend removed the arm of it and then did come cutting to the attachment underneath so that the dish would lay flat on the top of the pole (instead of at an angle that it would normally).

While the tweaking was going on, I assembled a premade 4’x4′ raised bed garden box. Of course, the ground was not level. So there had to be some build up on the back sides with the abandoned bricks behind my shed (like I did with the garden boxes in the back yard). 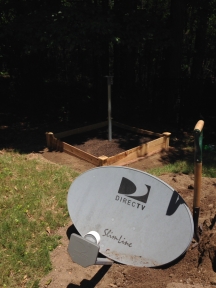 The dish and pole with a garden box.

Once the box was built up and level, I added soil to it. Then, we painted the pole. Once that was dry, we planted some flowers around the pole. The center flowers are Mandevillas so they will climb up the pole.

Once that was all done and the painted dish was dry, it was attached to the pole again, but in its new, more useful position. Now, to hold water though, there had to be some caulking around where the bolts went. And, due to the slight curve of the dish, the bath is shallow and limited to the center. These factors do make it easier to hose off to clean though. 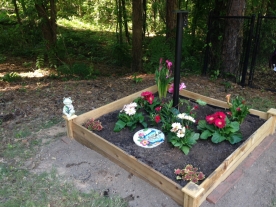 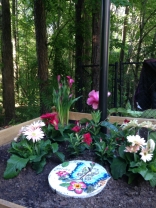 Close up of painted pole and flowers.

Now, with the dish bath.

It’s been a couple of months now, and we have watched to see if the birds have appreciated this repurposed satellite. We have seen some birds checking it out and there is evidence of some use. And, the Mandevilla is growing up the pole and just now reaching the top of the birth bath. Once it fills out some more, I will take another picture.

If the birds do not seem to really take to it, we may just install a bird house on the top of the dish. Then it will be a bird house with a patio I guess, lol. Or, we could take the dish off and put a bird house on top of that. Either way, it turned out to be a fun group project for us all. And more importantly, I am happy that we returned something back to nature…and it felt great displaying just what I thought Direct TV was worthy of – bird crap.

Oh my love
I cry to thee!
How can you ever
forgive me?

I swear I adore
all that you are.
But I am weak and can’t
meet your bar.

For you are glorious
across your lands,
and I am careless
with my stupid hands.

You create wonder
with every nook and space.
And I wreak havoc
with my smoke and waste.

From your flowing waters
to your fluttering birds,
I stand in awe…
I hear every word.

Yet, I fail to change.
And continue to derange.
Now I stand shocked
To find you feel estrange?

Is it too late for us to agree?
I realize now, the problems are…me.
Give me a chance to make amends,
Oh please don’t issue your final decree.

Let me love you the way that you need.
I swear I will cherish every seed.
I will teach our children a better way,
So they won’t live like me, full of greed.

For the Daily Prompt ~ Earth.

Happy Earth Day dear followers. May you have a glorious day:)

The week before and after Christmas were particularly wet here in Georgia. So wet there was major flooding actually. The Chattahoochee, which runs through the city of Columbus, reportedly rose over 30 feet. Local creek beds overflowed into rushing rapids … Continue reading →