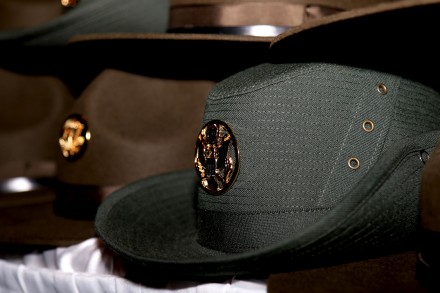 I have been slammed busy these past few weeks. As an Army Reserve Soldier, I have to balance my life between the civilian world and the Army. But even then, my civilian job is with the active Army. So my two roles are really very the same: taking pictures, writing stories, and managing communications of Soldiers. As a Reserve Soldier, my “client” is an Army Reserve Division. As an Army civilian, my “client” is a unique Army unit. So, I do the same things for both units, I just get to wear cuter clothes when in my civilian role.

This past few weeks, I was on a Reserve mission and started working on some stories. As it was Women’s History Month, I wanted to write an article on that. I had just gone to a drill sergeant graduation for my Reserve unit and had an access of great information and quotes, but I didn’t know where to start on a Women’s History Piece. So what does any good Soldier do? They call their command sergeant major for help.

I love it when things just come together.

Anyway, here is the story (or below) and just one of the reasons why my blog here has been a bit quiet…

The drill sergeant hat is an icon in the Army that creates vivid images. When people see a Soldier wearing it, they immediately feel respect because they know it is a job that is earned, not given.

In February 1972, six Women’s Army Corps noncommissioned officers from Fort McClellan, Ala., enrolled in the Drill Sergeant Program at Fort Jackson, S.C. Upon graduation, they were authorized to wear the newly designed female drill sergeant hat that was designed by Brig. Gen. Mildred C. Bailey.

“Those six women and that hat transformed the entire Army…and my life,” said Command Sgt. Maj. (Retired) Jennifer Dehorty, cemetery director intern, National Cemetery Administration, Veterans Affairs.
Dehorty’s statement is not exaggeration. It’s merely a fact of her own experiences as a trainee at Fort McClellan in 1981.

“All the cadre we had there were former WAC drill sergeants,” said Dehorty. “The esprit-de-corps that we learned from them was different. It was stronger….We even carried ourselves different than the trainees from other posts.”

Dehorty was so inspired by her drill sergeants, that she became one herself in 1984. But like a true Soldier trained by some of the Army’s first female drill sergeants, Dehorty pushed hard to do her best. And in doing so, she earned The Distinguished Honor Graduate title over her peers.

Looking back, Dehorty said she wasn’t trying to exceed the standards. She just wanted to meet them.

“In the day, those women not only set the standard, they WERE the standard. And I couldn’t think of being anything better.”

A little over 45 years have passed and those first female drill sergeants are still remembered for their bravery, said Staff Sgt. Briana Popp, an Army Reservist with 3-518th, 2nd Brigade, 98th Training Division (Initial Entry Training), who just graduated as The Distinguished Honor Graduate and Iron Female from The Drill Sergeant Academy March 8, 2017.

“They stared in the face of adversity and never backed down,” said Popp. The personal courage those first six drill sergeants put forth, paved the way for not only female drill sergeants, but just female Soldiers in general, said Popp.

With more and more women paving the way and others joining the Army, female drill sergeants will play a vital role in tomorrow’s Army.
“Being a drill sergeant is the most important job in the Army, hands down,” said Staff Sgt. Briana Kozain, drill sergeant leader at The Drill Sergeant Academy. “From the moment that civilian enters my world, I have the ability to plant a seed to change their entire life.”

“She inspired me and had such an impact on me that it was my mission, once I became a noncommissioned officer, to do all the things I needed to do to get to where I am today and become a drill sergeant,” said Parker who graduated with Popp from The Drill Sergeant Academy March 8, 2017.

Of course, becoming a drill sergeant is not an easy task. It just takes hard work, dedication and training. But it’s not impossible, said Parker.
“It is obtainable. You can do it,” said Parker who invited the drill sergeant who changed her life to her graduation.

Many female Soldiers have the ability to become a drill sergeant, they just need to believe they can, said Staff Sgt. Crystal L. Doherty, a combat medic who earned her drill sergeant title along with Popp and Parker and will be going on the trail at Fort Benning, Ga.

“Never let anyone tell you that you are not good enough. Always strive to be stronger than the next person. And, just keep pushing forward. There are no limits.”

The mud was so thick that it clung to my boots making it hard to march. We were not going far or fast, but my inexperience and short legs were struggling to keep up. I was not going to make, I thought. And then, I fell hard, face down in the mud. Another trainee reached out to help me up, but the drill sergeant screamed at them. “Don’t help her!” Then, he looked at me with such contempt and yelled, “Well, get up! Now!” I stumbled to me feet and managed a few more steps. I don’t know if I was really that weak, if I was flustered and overwhelmed or the mud was literally pulling me down, but I fell two more times in the span of 40 feet. Each time was hard, dramatic and utterly embarrassing. Mud was on my uniform, my face, my weapon. By the third time, I wanted to cry, but I couldn’t; I wouldn’t give him that satisfaction. The drill sergeant got down near me on my third fall, screaming in my ear, “You deserve an academy award!” At that moment, I decided this drill sergeant was going to be my enemy…and my best teacher.

The weeks after that horrible road march drug on and one. This screaming mentor was in my face all of the time. “Are you really this weak?” “What’s so funny smiley? Maybe you should do so pushups and see if that makes you laugh!” “Why are you here!” “Are…you….kidding…me?” “MOVE! You are holding up the entire company!”

He screamed, ranted and raved at my pathetic efforts. He glared into my face. It was intense, but I had a point of view others didn’t have. I went to basic training at 29. So I had a few more years of experience on me, and after the initial shock of the yelling, I realized that was just it. He was yelling to yell, yelling to create stress. The younger “kids” at basic took it a lot more personal. I eventually got the perspective that they were just words and put myself in his shoes. Then, everything was kind of humorous. I could see how he made up jump up and down, run in circles, and would yell at us for little things. It had to be funny on his side of the fence. We were a hot mess of smelly confused “kids” running around in a panic.

Everything he did had a purpose though. He taught us to pay attention to small details. We learned to look out for each other and work as a team. His “punishments” helped build our strength and patience. He showed us an example of behavior and how to carry ourselves with pride.

One day, we were all sitting around cleaning our weapons and he was talking to us about ethics and the heart of a Soldier. He said something that really hit me and I knew he was talking to me personally. “No matter how good someone is on the inside, they may not be made out to be a Soldier though. And that is a shame, for a Soldier’s true power is inside them. But, their body has to be able to support the fight.” I looked up at him. He was looking at me. I looked away quickly, thinking, “Is he trying to say I won’t make it?”

After that, I went out of my way to prove him wrong. I tried so hard. I held back tears of frustration. I laughed at how ridiculous we acted at times. I really absorbed the lessons he gave. I understood the reasoning behind the details. Everything had a purpose and built on each other. The ultimate goal was to make us stronger, resilient and prepared – to make us Soldiers.

I succeeded and graduated, and he continued to yell at me even on graduation day, but somewhere during that day he gave me the greatest reward. “I didn’t think you would make it. You proved me wrong. I am really proud,” and then he patted me on the back and walked away.

I never saw him again after that, which is a real shame. For if I did, I would tell him that he made me want to be a good Soldier, inside and out. He made me better. I still may not be the fastest, strongest or most agile Soldier, but I am still in the fight and holding my head high, and it is all because of him.

So wherever you are Drill Sergeant “B,” thank you for showing me how to be a Soldier and know that I give you much respect and will never try to tarnish the ideals you taught us.

Tell us about a teacher who had a real impact on your life, either for the better or the worse. How is your life different today because of him or her?